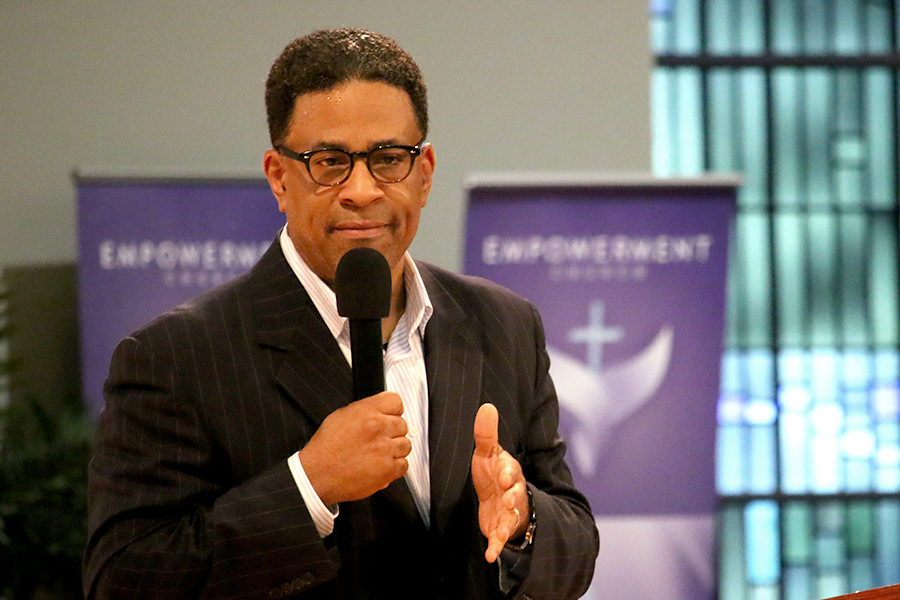 Rev. Dr. Carlyle Fielding Stewart, III, was born in Detroit, Michigan. He is the fourth generation of Methodist ministers beginning with his great grandfather, the Reverend Henry Elijah Stewart, who was ordained by Bishop Henry McNeil Turner of the African Methodist Episcopal Church in 1888. His grandfather, the late Rev. Carlyle Fielding Stewart, Sr, was the founding pastor of People’s Community Church, in Detroit, Michigan, after many years of distinguished service in the African Methodist Episcopal Church.

Dr. Stewart received a Bachelor of Arts degree with honors from Wilberforce University in 1973, majoring in Physiology, Social and Behavioral Psychology; a Master of Arts degree in Religion, Social Science and Policy Studies from the University of Chicago in 1974; Master of Divinity and Doctor of Ministry degrees from Chicago Theological Seminary in 1977 and 1978; and a Ph.D. in Philosophy from Northwestern University in 1982.

He was a Bishop Dwight Loder Scholar at Chicago Theological Seminary; a Crusade Scholar at Garrett-Evangelical Theological Seminary; an Urban Affairs Fellow at Northwestern University; a William Wilberforce Scholar at Hull University in England where he studied with the renowned British psychologist Dr. A.B.D. Clarke; a Merrill Fellow at Harvard University Divinity School; and was awarded a Fulbright Fellowship by the Institute of International Education for study at the University of Ghana in 1973 but had to decline because he could not raise funds for airfare.

He is the recipient of numerous awards and citations including the prestigious Circuit Rider Award from the United Methodist Church in 1993; the Harry A. Denman award for Evangelism in 1996; Congressional Citations from Congressman Sander Levin and Congressman John Conyers in 1996; and the “David L. White” Laity Award, National Black Methodists for Church Renewal in 1999. In 2000, Dr. Stewart was honored with the Carlyle Fielding Stewart, III Endowed Scholarship at Garrett-Evangelical Theological Seminary in Evanston, Illinois and was inducted into the Martin Luther King, Jr., Board of Preachers at Morehouse College in Atlanta, Georgia.

In 2002, Dr. Stewart was the recipient of the “Drum Major for Justice Award,” given by the East West Districts of the Detroit Conference of the United Methodist Church; the “Martin Luther King, Jr., Humanitarian Award,” from Drew University; and the “Gandhi, King, Ikeda Award” from Morehouse College in Atlanta, Georgia. A tireless pastor who has dedicated his life to serving others, Dr. Stewart was recognized in 2012 as “Pastor of the Year” by the Metropolitan Christian Council of Detroit and Windsor.

Dr. Stewart has served on the Board of Trustees of Garrett-Evangelical Theological Seminary since 2003. In 2008, Michigan Governor Jennifer Granholm appointed him Commissioner on the Appellate Defenders Commission which provides legal representation for indigent clients where he served until 2014. The only non-attorney on the board, Dr. Stewart was asked to serve another four year term for his outstanding service. He was a member of the Development Committee at Ashland Theological Seminary and has served on many boards and agencies throughout his ministerial career. He was also a mentor in the Doctor of Ministry Program at United Theological Seminary in Dayton, Ohio.

Dr. Stewart he has authored over thirteen books and published over one hundred-fifty articles in journals and newspapers. Many of his most recent articles can be found at www.carlylestewart.com.

After 31 years of faithful service as the Senior Pastor of Hope United Methodist Church in Southfield, Michigan, Dr. Stewart took early retirement in 2014. Under his leadership, Hope grew from a church of 150 people to over 4,000 within two decades, with over 80 ministries, and nearly 100 clergy being trained to either pastor their own churches or serve in other areas of ministry. During his tenure, Hope received the prestigious “Church Growth Award” from the UMC Detroit Conference for 10 consecutive years, and the congregation invested millions of dollars to support the needs of the growing community by building a state of the art Gym & Fitness Center, Education Facility, and an Administrative Center.

Upon learning that Dr. Stewart was taking early retirement from Hope United Methodist Church, but not from ministry in the Detroit Metropolitan Area, the founders of Empowerment (aka the Pathfinders) recruited him to serve as their guest speaker. On July 6, 2014, former members of Hope United Methodist Church, and others, opened the doors of a new faith community in Southfield, Michigan called Empowerment Church.

Then on January 2015, the Pathfinders asked Dr. Stewart to officially join the church as their Spiritual Leader.

He is a caring pastor and a faithful servant of the Lord who loves serving the people of God and believes in letting his light shine for Christ.

His personal mission statement is “Show people God’s way and stay out of God’s way.”

Carlyle is married to Jeané, and is the proud father of three children: Mya, Naeemah and Carlyle IV. He is also a member of Kappa Alpha Psi Fraternity, Inc., and belongs to numerous academic honor societies and civic organizations dedicated to the spiritual, educational and social uplift of all people everywhere.

Dr. Stewart is a writer, scholar, teacher and a preacher; he is an advocate for peace and justice, and a spiritual counselor and advisor.